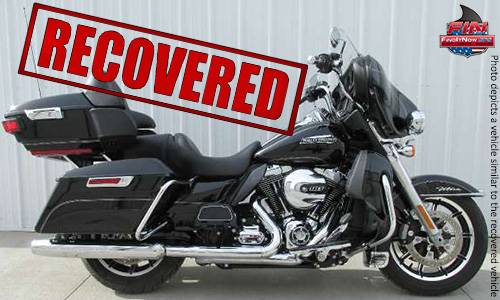 Chattanooga, TN â€“ On May 8, 2016 at 6:30AM, the Find It Now GPS Security theft recovery team received report of a stolen trailered 2014 Harley Davidson Ultra Classic motorcycle. Leveraging the powerful GPS tracking features of the FIN security device installed at motorcycle purchase, along with state-of-the-art software and tracking tools, a FIN vehicle recovery exert was able to locate the stolen motorcycle within moments.

Returning to Indiana from a trip to Panama City Beach, FL, the motorcycle owner stopped at a hotel to rest for the evening. It was reported that he disconnected the trailer, secured it with a tongue lock, and left it in a well-lit area of the parking lot.

The FIN device owner woke up the following morning to find a motion alert, reported via text message, on his cell phone. He immediately looked out of his hotel window to discover that the trailer was gone. After contacting Find It Now, the customer quickly contacted local police as instructed. FIN was able to provide the specific location of the stolen motorcycle and trailer to responding deputies, which was a rest area in Chattanooga, TN, approx. 70 miles from the hotel. Several deputies responded to find the trailer attached to a van, which appeared to be abandoned, and later found to be stolen as well. After approx. 60 minutes of surveillance with intentions to capture the thief (or thieves), and no sign of the perpetrator(s), it was decided that they would recover the stolen van, trailer, and motorcycle without waiting for their return. The Harley owner was relieved to find no damage to trailer or motorcycle.

Established in 2008, Find It Now USA is a Florida-based, Veteran owned and operated company, specializing in motorcycle and power-sports vehicle theft detection and recovery. Visit FindItNowUSA.com or call 888-811-3883 for more information.